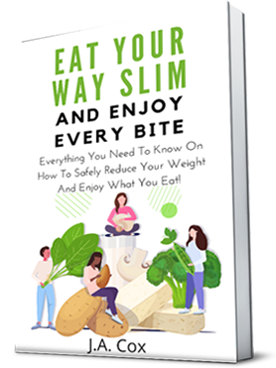 Nobody has ever seen a calorie, but calories are agonizingly visible when they settle in the wrong places. It may seem strange that a thing which has no physical existence can make you fat. A square inch has no flavor and neither has a calorie. You can't touch a calorie any more than you can put your finger on a heat wave. It is as invisible as a fever. A calorie, in short, is merely a measuring unit of energy in terms of heat. It is a thermal yardstick applied to the exchanges of energy in your body and to the foods that provide such energy.

In a furnace, coal gives off heat which could be measured in calories but is usually calculated according to a different yardstick called British Thermal Units. In you, food gives off heat measured in calories, one calorie being the amount of heat required to raise the temperature of a pint of water 4 degrees Fahrenheit. Now you may promptly forget that definition. Nowhere in this book will you be requested to learn a lot of technical shop talk. Weight control arithmetic is so simple that it is understood as easily as Mother Goose.

Coal, if mixed with slate, does not give off very much heat. Some foods contain much water, inert fiber and other unburnable elements so they do not yield much heat either. You cannot judge, from the mere physical bulk of a meal, how much energy value it contains. It is possi-ble to eat small-size meals and grow ingloriously fat on them. It is also possible to eat meals of huge bulk and grow thin as a rail. The differ-ences are a matter of calories.

All calories are alike, but there are three different kinds. That sounds like a paradox. Let's be scientific, then, and explain that although any calorie represents the same amount of heat, it can be furnished by three very different types of food elements: carbohydrates, proteins and fats. This makes a difference in your weight-reducing program. Mere calorie counting is no longer enough. One kind of calorie is far more efficient as a weight-reducer than the other two kinds.

However, it would not do these three calories justice to only focus on them from the caloric perspective. For this reason, in order for you to gain the most vital knowledge needed for weight loss and good health, we will break down the caloric impact into three categories to shine the light on their entire effect to your overall well-being.